Menu
Cart 0
This is an archive blog.  There is now a new style of ice lolly popsicle make: the Lollitups! 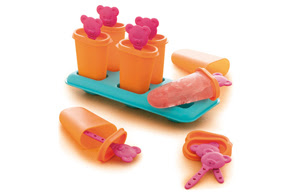 "Tiwi" is a teddy bear character devised and copyrighted by the Tupperware Brands corporation, but he seems to have never quite caught on with children. There have been a number of Tiwi branded products over the years, and he does still feature in some knick-knacks like colouring books and keyrings that I can use to keep hostesses' children out of my face while I am trying to entertain her guests. But Tiwi is pretty much toast, usurped by Hello Kitty and Spongebob Squarepants, both of whom are licensed for kids' Tupperware products that I can occasionally supply.

Funnily enough, Tiwi's last remaining product is one of Tupperware's most beloved and classic: the Tiwi Ice Tups, a.k.a. the Tupperware ice lolly makers. When I say beloved, I mean of course beloved by parents, not by the children they are aimed at. I am a childless bachelor, but even I know that just as children prefer Spongebob to Tiwi, they would generally choose a Fab or a Funny Foot over a frumpy home-made ice lolly.

Still, the Ice Tups are a fun and iconic product, and they always prompt cries of nostalgia when folks see them, and as such they are definitely worthy of their place in this countdown of classics. The set consists of a stand and 6 moulds, each stick featuring Tiwi himself. You also get a couple of extra seals and sticks for when they get lost (and they will). You fill the moulds with fruit juice. coulis, milk shake, smoothie or yogurt, then give them a few hours in the freezer to make healthy and original bespoke ice lollies.

But face the truth. If you order Tiwi Ice Tups from me, they are for you, not for your children. So why not make some grown-up lollies for yourself. If there was time at a Tupperware party to prepare and freeze lollies, I would be filling the moulds with coffee ice cream laced with a slug of Kahlua, then dipping them in melted chocolate before a quick re-freeze. Or I would make these fantastic and easy Pimms ice-lollies.

I have run Tupperware stalls at many summer fetes and fayres, and even though there are some quite spendy items on my display, it had never occurred to me that they are tempting thieves. Strangely, the only product that has ever been stolen is a set of the Tiwi Ice Tups, at the St Barnabus Community fair in Bow, East London. I blogged the whole sorry saga back in September 2008.