Menu
Cart 0
My customer and neighbour Richard Reynolds has his fingers in many pies, and such green fingers: his Guerilla Gardening project is wonderful enterprise that brings plants and flowers in the dead of night to bleak spots in London.

Richard took a trip around Europe this summer, and took this lovely photo of his picnic on a French train, showcasing his collapsible Mini-Max bowls. His Flickr photo essay of the whole trip called Travels with My Tupperware really made me smile. 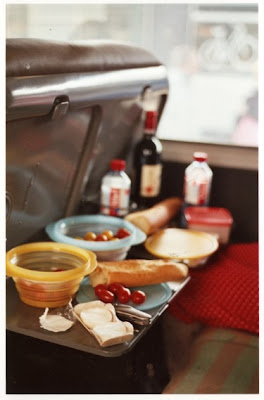 It's a few weeks now since Tupperware UK made me close my website, stop all
advertising and promotion of my business on other websites and in all media, and stop taking enquiries from new customers by email.

As explained to me by the Managing Director, I have been breaking three major rules of Tupperware:

* I infringed the company's trademark copyright by using the word Tupperware in my domain name, misleading customers by suggesting I am the Tupperware company itself, rather than an independent consultant.
* I used my own website to advertise my parties. With or without "Tupperware" in the domain name, this is not allowed.
* I promoted my business in other media and on community websites without permission from the Tupperware company to use their name.

Three strikes and I am out? Maybe... I accept that these are the rules (although I think thy are daft), but I really wish they had been clarified and enforced from the beginning, rather than a year into my enterprise when I have invested time, money and energy into bringing new-style Tupperware parties to London. I am the only consultant working in Central London, a huge potential market, and I have been consistently in the national Top 10 sellers since I started this enterprise last summer. Although interestingly, I have never been able to recruit a single new consultant to work with me, and have always had a lot of enquries from people who want to order from me direct, not by hosting a party, and these are also Tupper-no-no's. But mostly I think this says something about London, that it is a slightly different market to the rest of the country, for lots of reasons.

There did seem to me to be so many missed opportunities and so much unfulfilled potential for selling Tupperware to Londoners, and I felt I knew how to reach a London audience, particularly by promoting my parties and events through my own website and by marketing myself as the London Tupperware Man. I know now that was a big gaffe and has caused me trouble -- and apparently some bad feeling and bitching among other consultants. Though no-one has said anything to me directly, of course.

Anyway since my website and email were closed down, no surprise that I have booked no parties and have had no new customers. Thankfully, some people who contacted me before the website closed have been putting in direct orders, which I will be delivering this weekend. In future I can only stick strictly to the Tupperware party plan, and organise parties for people I have met at previous parties, or who approach Tupperware UK directly. In fact, this is how I should have been doing things all along. I don't think this will work for me, or for London, and this feels like a good time to start winding down.

I do have one long-booked party coming up in a few weeks at quite a posh London venue, which I am excited about, and will report back to you here about that soon.