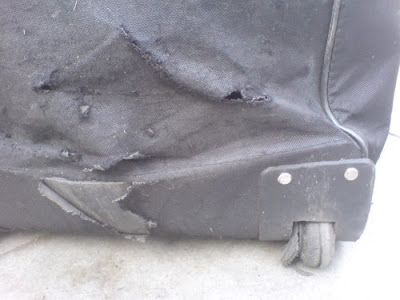 This week I turn 43. But it's not me that's clapped out -- how very dare you? -- it's my poor Tupperware standard issue trolleybag. I think it's designed to be wheeled from the car to the front door, but mine takes a pounding as I haul it onto buses, off trains, across cobbles and kerbs and through potholes. My first one lasted six months, and my second one, as you can see above, is not in great shape and will need to be retired before long. I, on the other hand, am still boyish.

Because Tupperware is only a couple of years into re-building its sales force in the UK, there are still parts of the country without a local consultant. While this is the case, I am happy to take occasional orders by post, email or phone from far-flung customers who need their Tupperware, but who don't have anyone local to buy it from. Normally, this involves parcelling it up and sending it by post. But this week I get to deliver in person. The order came from Alison, who lives in the far north of Scotland, but is to be delivered to her son Tony, who is in London. She has been visiting Tony recently, and has decided that he needs Tupperware in his life, namely a CheeseSmart and Cheese Knife.

So I call in to son Tony's Soho Square office one morning this week to deliver. The receptionist calls him to the front desk, pronouncing "Tupperware" in a very odd way, like a female Russian spy in a film. Tony appears and I explain who I am, and to his bemusement I demonstrate his Cheese Smart right there in reception. Tony explains that his mum had been a bit horrified by his slovenly cheese storage, hence the gifts. The receptionist smirks throughout, and as lift doors close on me I hear Tony say "Don't tell anyone about this, OK?" 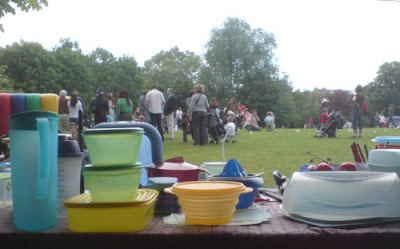 It's the season of summer fetes and fairs. Sadly I can't make it to my local one this year, the Merrick Square Summer Fete, because it is on the same day as the Walk for Life (please sponsor me). But the lovely Rachel, who I worked with on the London Lesbian and Gay Film Festival, has invited me to run a stall at the fair she is co-organising in Butterfield Green, Stoke Newington, a trendy middle-class part of North London.

It's a really lovely day, perfect weather to be outside all afternoon. I am a bit of a Nicole Kidman when it comes to exposing myself to direct sunlight, so I am pleased to snag a trestle table under the trees, with a panoramic view of the event. It's a very North London take on a summer fete: there are organic freebies, a stall with delicious Thai food, and a tug of war between the police, fire service and estate agents (with London house prices, they are practically an emergency service). I love the dog fashion show -- and only in Stoke Newington would the winning dog be dressed as Jean-Paul Gaultier. I could kick myself for not getting a photo taken with the Japanese swordsmen -- with their long ninja-style aprons, they were dressed exactly like me. But while they are wielding yard-long ceremonial swords, I have a Happy Chopper.