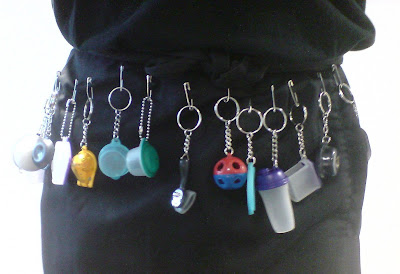 I only just found out that two weeks ago, Financial Times columnist Jonathan Guthrie quoted from my blog in an amusing piece about people who blog about their work. You can only read the whole article if you are a FT.com subscriber. He opines that "professional arcana can be oddly compelling", then goes on to summarise my blog:

"Tupperware Man, a 40-something plastic container salesman, communicates equal enthusiasm for the “tower of Space Savers” accumulated by customers Leanne and Paul of Purley. There is even a photo. Another shows the blogger’s “shrine” to the culinary icon Fanny Cradock. “I am back up there with the big girls,” he crows camply. “In November I was Number Four Tupperware seller in the UK.”

Do really crow camply? Perhaps I do. 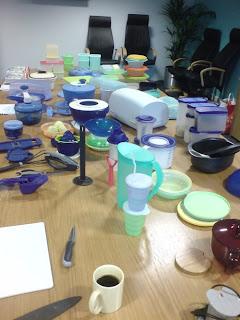 I take a little time this week to attach to my apron all the Tupperware keychains I have accumulated, and I have to say they look and sound fantastic (see main photo). At the end of the week I rattle in to the offices of Ascent Insurance Brokers in the City, to run a fundraising Tupperware party for them. It's a women's event for dress-down Friday, a fundraiser for the charity that support families of children with Fragile X syndrome. When I pop in earlier in the week to see the space I have been assigned, I find a huge boardroom table which is crying out to be covered in Tupperware.

My journey from home to the Ascent office in Fenchurch Street is a door to door 15-minute bus ride for me, so I take a lot products more than usual. Here you see them all respledent on the board room table. I set up shop for a three-hour chunk of the day, with people drifting in and out for cakes and coffee, and I add to the array with a microwave Chocolate and Almond Cake. Most people buy something, but I mean literally one thing, so although I take 15 orders, the sales are not that impressive. I can donate £38 as 15% of sales, and another £27 from the raffle, so £65 is an OK donation. But I think the organiser is a bit disappointed with peoples' spending. I work my apron off, but the customers are just not that thrilled with Tupperware as she had hoped. Although I have to say, the refrain I keep hearing, almost announced as a badge of pride, was that "I don't cook".

On Thursday I call in to the Vauxhall Tavern, scene of my bingo debut last week. My Tupperware cards are in the rack between the condom machine and the cards advertising the local police's hotline for hate crimes against gay folk.

A lady in Reading encloses a note with an order for a replacement Quick Shake: "The original was chewed up by a naughty dog in faraway Johannesburg and I have missed it ever since."