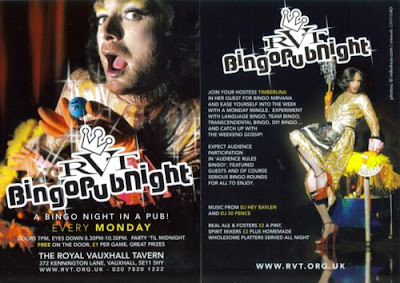 Tim was a guest at one of my parties last summer, hosted by BBC London presenter Baylen Leonard. A quiet and studious-looking young man, he is one of the team behind the House of Homosexual Culture and he recruited me to take part in their Homo Homemakers church fair in October. It was at the fair that I discovered that Tim is also Timberlina: singer, bearded lady, and hostess of the popular and innovative Vauxhallville, a cabaret night at the Royal Vauxhall Tavern, which is one of London's most famous old-style gay pubs.

On Mondays, Timberlina runs Bingo Pub Night at the same venue, and this week she invites me to help out. The stage is dressed as Timberlina's kitchen, with Tupperware everywhere. I am on hand in my floor-length apron to demonstrate and talk Tupperware in an onstage interview, and to hand out prizes to the winners. Everyone gets a gift bag with a catalogue, a 10% off voucher, a Tunnock's Caramel Wafer and a Chocolate Teacake. The Full House winners take home a Universal Peeler (which I demonstrate onstage with a kiwi fruit) and the Jackpot winner gets a blue Mini-Max. 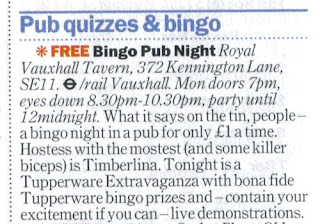 It always strikes me how much good will there is towards Tupperware. Everyone is in a good mood tonight and between the games, I work the tables like Fay Presto, doing close-up demonstrations of the Mini-Max, the Happy Chopper and the Cool Cubes. In another context, people may have been a bit bemused to be approached in their local pub by a man in a black pinny demonstrating kitchenware, but Timberlina creates an atmosphere of aderanged domesticity where it seems quite normal.

Two young women tell me they have come along tonight after seeing the listing in Time Out (above), and they confess that they are here for the Tupperware not the bingo. Isabelle, one of a group of French Londoners playing bingo pour le premier fois, wins three times and says she will definitely schedule a French Tupperware party some time soon.

Timberlina says it's shame we didn't get a (literally) full house, but I don't mind the small crowd. In fact I was glad it was small-scale for my first taste of performance. Not for me Dixie Longate's Tupperware Party, which opened off-Broadway this week.

Unfortunately I don't have any photos of my live demonstration with Timberlina. So here instead is my fellow consultant Miss Hot Stuff demonstrating her rather splendid cleavage as she makes ranch dressing in the Quick Shake.