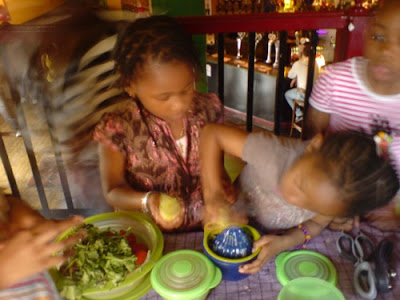 This weekend I am invited to run a Tupperware stall at the Heritage Inn in Cricklewood. In fact, I am an official sponsor, since I am donating about £25-worth of Tupperware for the raffle table. The Heritage Inn is a Caribbean bar and restaurant, and today they are hosting a special family day with salsa dancing, cocktails, a raffle and a talent showcase. There is also a small market place with hair braiding, African jewellery, and a beautifully turned out woman from Mary Kay, a party-plan cosmetic company. Two enterprising young guys sell t-shirts bearing black cultural heroes like Muhammad Ali and Martin Luther King (and Bruce Lee, curiously), and up on the balcony there is me in a pinny selling plastic kitchenware and making salsa. I am far too white and inhibited to dance the salsa, so I stick to making the salsa in my Quick Chef. 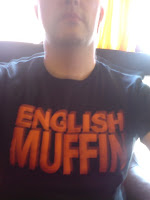 Knowing almost everyone else will be Afro-Caribbean, I wear my English Muffin t-shirt for a laugh, and it raises some smiles and some good natured mickey-taking by the compere at the end of the night when I win a CD of vintage Jamaican music in the raffle, which I am listening to as I write this blog.

The event starts in theory at 3pm but it is very quiet until the entertainment starts at 6pm. Me and the woman from Mary Kay keep primping our stalls and shooting weary glances at each other as the long hours go by with no customers. The lack of punters is partly due to the sudden glorious weather today which is keeping people outside, and everyone who is inside is watching the Grand National. What's more, the fine tradition of keeping "Caribbean time" means no-one is in a hurry. When the show does start at 6pm, Courtney the compere, a lanky Jamaican charmer, gets us all enthused for "this beautiful family day" with a showcase of "edu-tainment" for the youngsters. People have given their time to perform for nothing, and although not everything is my cup of tea, I don't suppose it is meant to be. I do love the Jamaican comedian who has some hilariously clever and cruel observations of Caribbean and English cultural manners and behaviours, but sadly Miss Ebony Queen is not the drag act I was hoping for, rather a fearsome woman rapper. Another rapper, Nicky Negro, does not seem quite in the beautiful family spirit to me, with his blunt declaration that the government "keeps you in the nigger state of thinking", but it mostly goes down well. 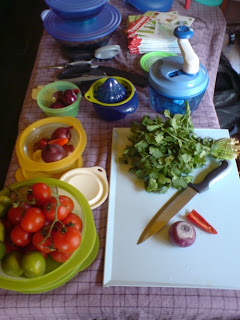 There has been a terrible toll of knife and gun crime perpetrated mostly on, and partly by, young black men in London over the last few months. Although thankfully it hasn't specifically affected the community here in Cricklewood, the violence of these deaths is mentioned several times today as the opposite of the peace, love and pride that the Heritage Inn promotes. From the sublime to the ridiculous, at the same time I am having my own struggles to keep the kids away from the blades. A group of five under-10s has latched on to my stall, and they are enthusiastically helping me make salsa. I make sure their fingers stay away from the cut chillies, and clear of the chopping board and Tupperchef knife while I prepare tomatoes, onions, chillies, limes and coriander for processing in the Quick Chef (that's it with the white handle in this photo, next to the chopping board). It is perfectly safe for kids as long as they keep their fingers out of it, and my helpers certainly give it a good work out, whizzing the handle round and pulverising the veg. The Citrus Wonder gets a pounding too (see main picture, top).

The Heritage Inn promotes black British cultural and culinary heritage with style and panache. They also do a fantastic rum punch, which keeps me going through the lean patches early in the day. I also have to take a big swig when one of the performing poets declares that his life is "being controlled by fags". "Not this fag", I murmur. I want to cover the children's ears at that one, but my hands were covered in chopped tomato. 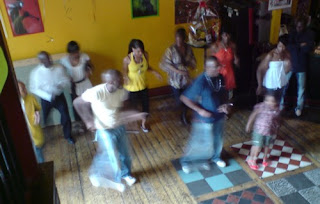 My salsa is popular, I give away some catalogues and do a bit of product demonstration when the music levels permit. It doesn't feel like an especially sparkling day for increasing my Tupperware business, but who knows who may contact me in the coming weeks as they are leafing through their catalogue. My fellow consultant Tracie in the West Midlands does a lot of specificaly Afro-Caribbean Tupperware parties, and it's a market I have not yet infiltrated. Anyway, mostly my day at the Heritage Inn is a bit of fun, and an interesting opportunity to be the token English Muffin. After all the rum punches, it feels pretty fine to me. I even bought a Muhammad Ali t-shirt. Apart from all his obvious admirable qualities as a sportsman, entertainer, political figure, cultural giant, and gloriously handsome man, I have always had a soft spot for Ali since I was 13 and my German pen-pal's insane mother said to me over dinner at their house in the Rheinland, "You look like Muhammad Ali".