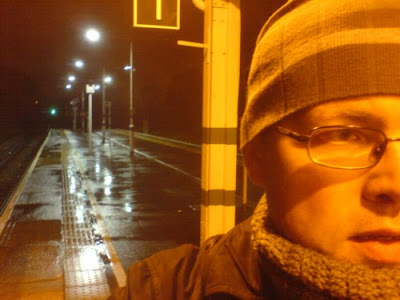 Catching up on the last few weeks....

It's a dark wet night when I travel out to Woodmansterne to deliver Leanne and Paul's Tupperware. On the way home, I am the only person at the station, the driving rain keeping me in the shelter. I am not complaining at all: Leanne and Paul are a lovely couple who hosted a fun party, and they have already booked another one for all the friends they couldn't squeeze into their flat last time.

It's a rare party that I can walk to. But my very near neighbour Richard, who runs Guerilla Gardening, is hosting a Sunday afternoon party at his flat. Everyone will have eaten so we go for a dessert recipe. At home, I test Tupperware's official creme caramel recipe in the microwave, and it doesn't work. Grainy on the outside, not set in the inside. There are alternative instructions for an oven-cooked version and since the Silicone King Form (i.e. loaf tin) is fine in the conventional oven, I decide to do that instead. Only that doesn't work either. Calling Tupperware HQ: your creme caramel recipe doesn't work and made me look a fool. Still, it was a good party, and I didn't have to trundle the kit bag very far. Richard's flatmate Meike blogs about the party, and she generously blamed the failure of the recipe on their oven. I am not so sure.

The catalogue has switched over to the new Spring/Summer 2007 edition, marked by a gathering of Tupperware consultants at the new distribution centre in Woking. Meanwhile I still have a stack of the previous catalogue, so while it still feels like winter in London, I decide to distribute them to South African shops in the Wimbledon area. I have done a couple of parties down there, and noticed how many Saffas live there, and I know from South African customers how popular Tupperware is with them. 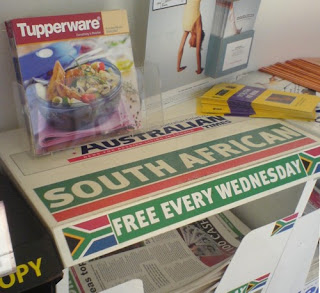 I visit two branches of The Savanna and leave catalogues prominently displayed. In the tiny branch near Raynes Park station, I get the full cultural experience by buying a piece of biltong and queueing behind a man with no shirt on. It is an unusually warm March day, but really!