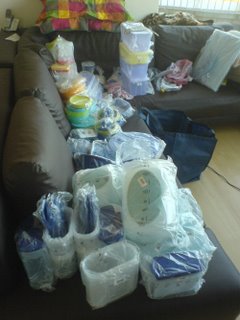 Here is my sofa piled high with last week's orders, ready for sorting. I am glad to say I am back up there with the big girls: in November I was number 4 Tupperware seller in the UK.

Ok, sometimes things go slightly wrong. I burned the chocolate at my stepmother's party last month, and last week a guest caused some etiquette problems for the hostess when she arrived a bit tiddly. But this week I hit the jackpot with my three parties:

Party 1: No guests
Party 2: No sales, and I forgot the recipe
Party 3: I went to the wrong house

Julie admits that she has been a bit tentative with her invitations to her lunch party with added Tupperware. Her guests must have reflected back her casualness. Julie is a friend and a previous host, and mid-morning brings a phone call saying no-one is coming. Except one person who has already rung and said they have no money so won't be buying. Julie has prepared lunch, and she is a great cook, so I agree to go over there as planned, and prepare the Christmas muffins recipe I sourced online. But it will be friends having lunch, partly prepared in Tupperware. Not a Tupperware party. A real party, with more robust invitations, will follow in January.

Chie's party is the one with no sales. It starts off on the wrong foot. I arrive with everything to make fresh salsa, when I had in fact told Chie we were making quiche. I am slightly thrown, but we improvise and the quiche is a success, only it is made in Chie's own quiche dish while mine languishes smugly across town in my Tupperware storage cupboard. Which slightly defeats the object. Ah well. So why no sales? Well, all the guests say they want more time to think, which I cynically interpret as "Thanks, but no thanks." I agree in theory to take orders by phone and email a few days later, thinking "Yeah right", but I eat my words when the charming Chie rings a few days later with everyone's orders.

Party number 3 is jointly hosted by Katherine (who organised), and Paul and Roy (who provided the venue). And guess who got the addresses the wrong way round? Yes, 2pm on Sunday sees my pounding on Katherine's door in Tooting, even as guests are gathering at Paul and Roy's in Crystal Palace. A quick phone call and a speedy taxi ride later, I am at the right venue. Some guests were fashionably late anyway, so I was off the hook.

What had seemed like it might be my third blunder or botch of the week actually becomes one of my best parties ever. An enthusiastic and vocal crowd, charming hosts, lots of sales, and I have to say that I am on sparkling form. After making the microwave cake in the kitchen, we troop up to the first-floor living room for the rest of the show. Many of the guests are involved with Stonewall, the gay rights organisation, plus there are assorted friends, parents and other halves. Katherine and the boys split the rewards between them: £90-worth of free Tupperware and 3 half-price items.

Katherine's mum was a cheeky minx: she suggested that when no-one was looking I might be switching the cake in the microwave for one I made earlier.