Menu
Cart 0
Hosts sometimes become very anxious and apologetic if the turnout at their party isn't what they expect. There is really no need to apologise to me. My parties have ranged from 3 guests to 23 guests, and they have all been fun. Unfortunately, it's the host who loses out if people stay away, because I calculate their rewards (or the donation to their chosen cause) from a percentage of the party sales. I have two parties this week, and both had a turnout that was less than the host had hoped for, but both were fun and interesting for me all the same.

First to South Croydon for a party hosted by my friend James, where we bake the chocolate and almond cake in the microwave. It is his church crowd, although some of them can't make it because of another event. Still, there is a vicar, an organist and many pillars of the congregation. Andrew the organist loves most of the catalogue, and has lots of questions and comments. His partner regularly rolls her eyes to Heaven. I ask the Reverend to dust the cake with icing sugar using the Sift and Stor . He does it very grandly and cermonially and from a dramatic height, throwing in his sure and certain hope of the Resurrection into eternal life.

James earns £40-odd worth of Tupperware, and he will be experimenting with some Fridge Smarts. 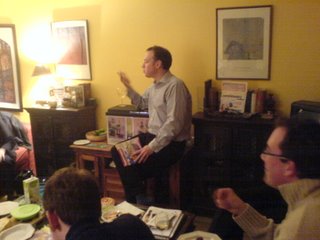 Next day I am heading out west to Southfields. It's an Antipodean enclave close to the Wimbledon tennis club, the shops full of biltong and Milo. But I am required at a thoroughly English fundraiser at Lorraine's spotless house with some mums from her children's school. Lorraine's own children are beautiful, charming and polite. They tell me the products are very clever, they thank me for coming, and they remember my name when they say good night and troop off to bed. They are model guests for future parties.

We make fresh salsa in the kitchen. I have to compete with a gigantic hornet, which Lorraine eventually catches in an ingenious perspex trap-on-a-stick. I also am challenged by one rambunctious guest who has surely come straight from another party, and who offers plenty of high-volume questions and comments and feedback. I am perturbed at first, then amused, but it's clear some of the other guests are mortified. It's a scene out of Abigail's Party.

Even as I am speaking, I am thinking that some of my standard quips about the products are starting to sound aimed at this guest, and are sounding a bit unkind. But it is just my usual shtick, mostly stolen from Dixie Longate. And anyway Dixie is right: the Expressions No-Spill Tumbers with Dripless Straw Seal really are fantastic for people who are liable to spill their drinks. It's just that normally there isn't normally a guest spilling their drink as I am saying it.

This is the fundraiser for which I was asked for 50 invitations, so if anything I am relieved when there are only a dozen guests. Bigger parties can tend to break up into smaller groups and I have to shout a bit. The party raises about £50 from sales, plus another £18 from my raffle, plus a £5 entry fee donation from each guest (Lorraine's own initiative), plus 20% Gift Aid because the school is a registered charity. I am too weary to add that all up right now.

At least one of the vintage Tupperware ads that I have blogged has been removed from YouTube "due to copyright violations". I really hope the Tupperware company didn't instigate this removal. They are understandably strict about the use of their name and image, but the old ads are great fun, and it's a shame to lose them. The latest addition to YouTube is not an ad, but is the first few minutes of what appears to be a French-Canadian documentary about Tupperware ladies. My French is rubbish, so I am none the wiser.

Incidentally, the first things you see in this little clip are the No Spill Tumbers mentioned above.