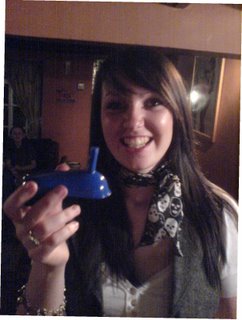 The Chocolate Almond cake has long been my most popular party recipe. It is tasty, easy, good for communal cooking and for showcasing the Tupperware. And impressive: a chocolate cake in 15 minutes!

Until tonight. As always, I put the chocolate into a Microplus Pitcher and melt it in the microwave for one minute on Medium power. Trouble is, after 30 seconds, one guest murmurs "I can smell burning...". I yank open the microwave to see the clear pitcher opaque with smoke. Taking the lid off, theatrical thick smoke boils out like from a witch's cauldron. Some of the chocolate has burned, and I toss it in the bin, but we rescue most of it.

It seems my hostess's microwave doesn't work on Medium Power, only Full and Defrost. Which is a problem because the cake needs to be cooked on Medium. I compromise with short bursts of Full and a bit on Defrost, but it's no substitute and the cake is a bit of a failure in both taste (burnt chocolate) and texture (not properly cooked). Oh, and I forgot the baking powder and had to chuck it in at the end.

Now normally I would be freaking out, but the pressure is off because the hostess is my stepmother Gill, who has convened some friends for a fundraising party for the Noah's Ark Children's Hospice in nearby Barnet. Sales + my raffle + Gift Aid lead to a £60 donation.

On the train back to Liverpool Street station, a group of young women scream their heads off and blatantly graffiti the carriage with a black marker pen. I report them to the station police when we arrive.

It's about midnight and at my bus stop outside Liverpool Street, a well-dressed, well hammered woman peers into my open kitbag, swaying and breathing through her mouth. "Tupperware," I explain, "just been doing a party." She flicks at the silicone cake tin, from which my Dad (below) has washed all trace of the dodgy cake and I explain what it is.

"Loads. Here, have a catalogue. That's my name on the back."

"Is that bus going to London Bridge?", she slurs. I tell her yes, and she lurches on to the bus, doors closing on her. Last thing I see is her plonking heavily down, flicking through the catalogue barely focussing. 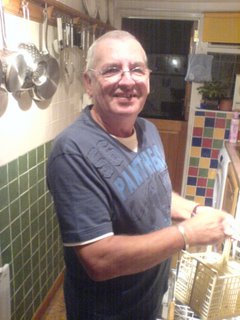