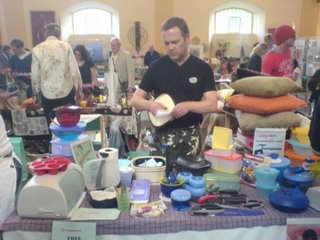 The autumn fayre St John's Church in Waterloo has been dubbed "Homo Homemakers". It aims to celebrate the domestic skills of lesbian and gay Londoners, and it also implicitly questions the emphasis on the hedonistic and sexual areas of life, which dominate many people's perceptions of gay folk. The organiser, journalist and author Rupert Smith, explains more in an interview in this week's Time Out London, where I am also quoted burbling on about Tupperware.

In fact, I was up till the early hours, but I was not off my tits on E in a sweaty club in Vauxhall, I was baking muffins in my silicone muffin form. I stash about 60 muffins in the new BreadSmart, and pile most of my demo kit into the back of a taxi for the short journey to St Johns. The trestle tables are already set up, and I have a key spot at the front of the hall. To my left, two nice lesbian women display their hand-made cushions, but the stall to the right is empty for ages until virtuoso pastry chef Gerhard Jenne and his crew from Konditor and Cook arrive. It's a battle of the muffins, although pitting mine next to Gerhard's was like Carol Vorderman arriving at a party in the same dress as Penelope Cruz. 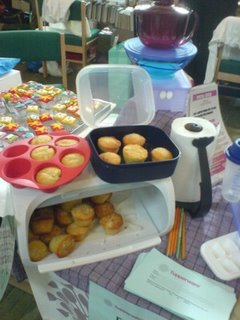 Guest of honour Sir Ian McKellen gives a sweet and funny opening speech, and I go into Tupperware Man autopilot from noon until 5, demonstrating up a storm. Sir Ian comes over to ice a gingerbread man on Gerhard's stall. He ignores my Tupperware, but he is X-Man Magneto after all, so his affinity is with metal not plastic.

Everybody smiles when they pass my stall. People say "Hang on, you really sell Tupperware? You really run Tupperware parties? You would really come to my house and run one for me". Yes, yes, and oh my dear yes. I run a prize draw for a Fresh and Pure ice tray, which is won by Luke from Notting Hill. On their entry tickets, 22 people have said "Yes" or "Maybe" to hosting a Tupperware party of their own, so I will be contacting them all this week.

Brian on the bric-a-brac stall has a stack of 1960s Tupperware beakers in milky pastel shades. You can just see them over my right shoulder in the main photo.

My friend Kazu has the stall behind me, with his beautiful Japanese floral arrangements. We agree to recommend each others' services to couples who are are having civil partnership ceremonies. He can do the flowers, I can do a Tupperware gift list. And Kazu gives me one of his cool-looking arrangements to take home.

This was a really fun event, I met some interesting new people and caught up with some old friends. Friends and customers Laura, Claire, Casper, Bo and Adam all dropped in to say hello and eat cakes. For a full set of photos of the event, visit Kate's Flickr page.