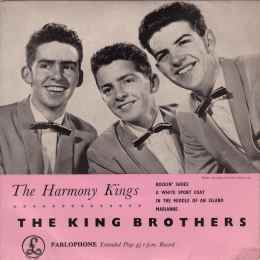 When I am not dithering in front of the wardrobe trying to choose an outfit for Wednesday's national Tupperware Jubilee, I am marching around my house to The Tupperware Brigade. This is the song that was recorded especially by the King Brothers for the 1967 UK Tupperware distributors' conference, and which I bought on eBay recently.

The photo above shows the Kings at the start of their career in the 1950s. From my research, the Tupperware promo record seems to be one of their last recordings. The cod military march style has a bit of a Colonel Bogey vibe, and the singing style has a touch of Herman's Hermits. Composer and youngest King brother Denis has gone on to have a long career writing TV theme tunes, including the classic "Galloping Home", the theme to the 1970s series The Adbventures of Black Beauty. The lyrics are by humourist John Junkin, who died earlier this year. I have had a very nice email from Denis King today, after I emailed him via his agent on Saturday (bless Google), and he gives me permission to include the song on my blog.

Listen to The Tupperware Brigade.

Who's the happiest housewife in the kitchen?
The one with Tupperware on the shelf
I tell you any housewife finds that it's bewitchin'
It's light, it's bright, the price is right
And you can make some cash yourself
We're giving a party soon and you can come for free
So come along and see, we're sure that you'll agree

They've got a range of kitchen goods that are the best
Why don't you come along and put them to the test?
Once you've tried them you'll agree it's true
All the things that we are telling you.