Menu
Cart 0
When they hear about my fancy summer holiday in Mauritius, people say "Wow, you must be doing really well with Tupperware". It's true that I am doing pretty well, but not that well: in fact I won the holiday in a competition at Harrods last summer.

It is sometimes a pain using public transport to get myself and my kit bag to parties. So I am pleased to discover a direct train from my local train station, Elephant and Castle, to Mill Hill Broadway where Stephanie has requested a Tupperware party with her friends. On the phone, Stephanie told me it will be a group of pensioners, and I fear the whiff and dead hand of the nursing home. On the contrary, I arrive to find a feisty, noisy and vivacious bunch who jostle each other to get into Stephanie's conservatory to admire my display table.

Two weeks after every party, I have to haul the orders back to the host's place. Every Thursday, the Tupperware orders from the week before last are delivered to me from France. I work on Thursdays at the university, and there is no-one back at home to sign for the delivery, so it all arrives at my office. I stay back after work to unpack the huge cardboard boxes, sort everything into separate parties and individual orders, and pack them into Tupperware carrier bags ready to deliver to the host. The products are light, and for most parties, I can get everything into several oversized heavy-duty carrier bags from Aldi and Lidl, which I can easily shlep onto the train, bus or tube. For bigger parties, or if several people have ordered large items like a Salad Spinner, Bread Box or Cutting Board, I have to take a taxi.

On Friday this week I deliver all the orders from Daniel's party (see Hot Hot Hot below). This is definitely a taxi job: three large cardboard boxes, all brim-full, and one of them just containing Daniel's free and half-price rewards. I use a local cab firm and my driver can neither drive, speak English nor even find London Bridge, never mind the small side-street off Borough Market where Daniel's studio is. At one point we are stopped by the police when he tries to do a U-turn in rush hour traffic. 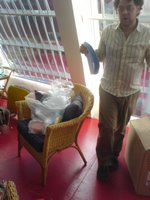 Daniel has reconvened a follow-up party for guests to drop in for a drink and to collect their Tupperware. I hand out the bagged-up and labelled orders, and adult men and women clap and rip open their packages. I feel like a 21st century Tupperware Santa Claus.

Daniel tells me that he has noticed that the Borough Market branch of Paul Smith, round the corner from his office, is selling Mini-Maxes. This seems odd, surely he is mistaken. I pop round to check. As well as his own range of clothing and accessories, Paul Smith's shops also sell an eccentric selection of toys and other products that have caught the designer's eye, or "products that Paul has found on his travels" as the website says. Sure enough, there are two Mini-Maxes there, the smallest 700ml size but in orange and green, not the yellow that I sell: 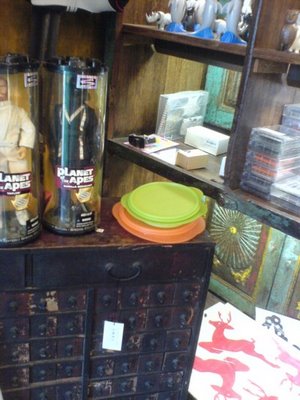 I over-casually quiz the chap behind the counter about them, wondering out loud if people ever ask about other colours and sizes. He admits that no-one has ever bought one, and at a whopping £12 (twice the catalogue price) I am not surprised. I glean that all Paul Smith shops have the same non-Paul Smith products, so it is someone centrally, maybe Paul Smith himself, who chose to display the Mini-Maxes. I leave a couple of catalogues and my contact details, in case the Tupperware fan in question wants a party.