Menu
Cart 0
Yesterday was the first anniversary of the terrible suicide bombings in London. Some reports at the time mentioned that the explosives were in a Tupperware-style box: it was actually a large empty plastic rice container. Memories of that awful day were on my mind as I haul two holdalls of Tupperware home onto the 25 bus (orders are delivered to my office, not my home). A year earlier, on that very bus I had been caught up in the chaos around the explosion at Aldgate station on my way to work. I was turfed off the bus right by the station, just minutes after the explosion. We passengers all had to hurry of the cordoned-off area, not knowing the seriousness of what had happened under the street.

I work in an area of London with a high Muslim population, and it occurs to me that sadly if it was one of the many young Muslim men on my bus who were carting large, mysterious and curiously light holdalls, he would attract some suspicious looks. I am happy and proud to live in a this diverse city, to where people from all over the world come to be themselves and live good lives.

Back to my parties. Last Sunday I take a short bus ride to Rotherhithe to Lia's house by the Thames. There is a cool breeze off the river, and at one point in the middle of my demo, a pirate galleon sails by, advertising the film Pirates of the Caribbean. It is the hottest day of the year so far. London is subdued and sluggish, and so am I. Put it down to the heat and England crashing out of the World Cup on penalties. 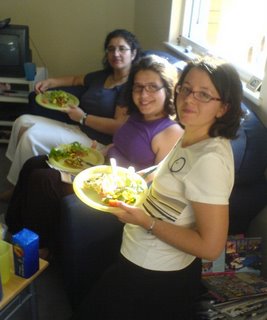 Lia and her two guests are vivacious young Greek women. Lia is a big Tupperware fan, and wants to se what's new. She reckons she already has 75% of what's in the current catalogue. It means I can leave some things in my kit bag and ask Lia to demonstrate her personal items. There is lots of laughter and chat (in English and in Greek) and nice snacks. All the guests' mothers back in Greece swear by their "Tuppers", especially the Quick Shake and the Jel Ring.

It's a small but perfectly formed party, and I feel sure I will see the ladies again. Sophia is taking a catalogue home and will make a further order after payday. Lia is a Tupperware fanatic of old, and will be reqesting the new catalogue in September. Theodora is throwing a housewarming party soon, and is keen to earn some free and half-price Tupperware by hosting a party. And I seem to have passed some sort of test, because she adds "when one Greek likes you, they all like you".

We make the Quiche without Pastry. I stick with broccoli and stilton but feel pleased with myself when my suggestion of using roast peppers and feta meets with a Greek chorus of approval.